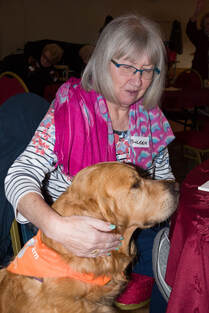 Steve Gaskin, a keen amateur photographer whose wife Kathy has Alzheimer's had provided photographs for Dogs For Good  and The Forest of Dean Dementia Action Alliance for their fantastic DOG DAYS initiative where they both regularly attended.

Kathy was first diagnosed in 2016 at the relatively young age of 67 and of course it changed both their lives; Kathy losing her independence in a short period of time being no longer able to drive and manage her day to day activities, and Steve eventually becoming more of her Carer than her husband.   Despite the lows and Kathy's declining condition, she always seems to manage a smile (which Steve appreciates isn't always the case for people with Dementia), particularly when she sees familiar and smiling faces, and her demeanour has been a key element of Steve's inspiration to capture these memories.

​In late 2020 Steve embarked on a project with dementia support group mindSCAPE.  mindSCAPE is a project run by Cinderford based ARTspace, and is a supportive and creative Group that helps people living with dementia and their partners to connect to nature through art, which Kathy and Steve had been attending monthly sessions for almost two years.   mindSCAPE work closely with The Forest of Dean Dementia Alliance.

Steve and Kathy who live in the Forest of Dean often go for walks to local beauty spots including Kathy's favourite place, Mallards Pike Lake.  It's a place that's easy to walk around and Kathy enjoys seeing people with their children and dogs and it helps keep them active and happy.

Steve suggested to the mindSCAPE team that it might be a nice idea for him to take photographs of clients' favourite local place, whether it be a beauty spot, their own garden, a building  etc and create a photo book which could be given to them.  This evolved into Steve arranging to meet those that could at their location so that they would be in the photograph and also suggested that if they wished they could add a caption stating why the place was special to them.
The idea was embraced by the mindSCAPE team who helped coordinate and also funded the project, and subsequently seventeen people and their loved ones received a lovely photo book as a Christmas Gift.  The project was well received by all involved.

As well as mindSCAPE, Steve had a contact within the Forest of Dean Dementia Action Alliance  and as  result, Steve wondered whether the concept would work on a bigger scale to raise much needed funds for the DAA, he put this idea to them.  It was important to Steve that the campaign had the backing and support of a recognised organisation and that all monies raised (less any admin fees), went directly to them.  In December, following a number of discussions with all parties concerned, the OUR FAVOURITE PLACES  Big Photo Album © project was borne and is planned to launch as a pilot across The Forest of Dean from March 2021. Should this prove successful, Steve plan is to go nationwide and build a truly Big Photo Album ©.
If you have already subscribed and uploaded your Favourite Place details, we would like to thank you, if not, and you can see the merits of this Project we really hope you will participate and also spread the word.
Thank you for taking time to view Our Favourite Places Big Photo Album ©

If you may have reached this site by accident or out of interest but may not require the option of a Favourite Place photograph, you can still support this cause using the 'DONATE' button below. All contributions are very much appreciated and go directly to the Alzheimer's Society.
DONATE
*At least 95%* of your donation will go to the Alzheimers Society, only a small transaction fee will be taken.

BACK TO THE BIG PHOTO ALBUM HOME PAGE
WE WOULD VERY MUCH LIKE TO THANK THE ORGANISATIONS AND COMPANIES BELOW WHO HAVE OR ARE PROVIDING SUPPORT FOR THIS PROJECT.
| Get Out Get Active | ARTspace Cinderford | mindSCAPE | Crossroads Care | FOD Dementia Action Alliance | Forest Hills Golf Club | Eagle Web Solutions |