Every now and again you come across someone who you immediately want to photograph, either because of their image, behaviour or situation.  It can be a challenge to engage with the individual who might be unknown to you, as you're never sure what reaction or response you might get.    This of course is part of the challenge and the end result can be extremely rewarding.   My Picture Stories are not just about the image, but also about the individuals circumstance, hobby or history.   This collection is in its early days and contains those individuals who fit into the aforementioned criteria.  I hope you enjoy them? 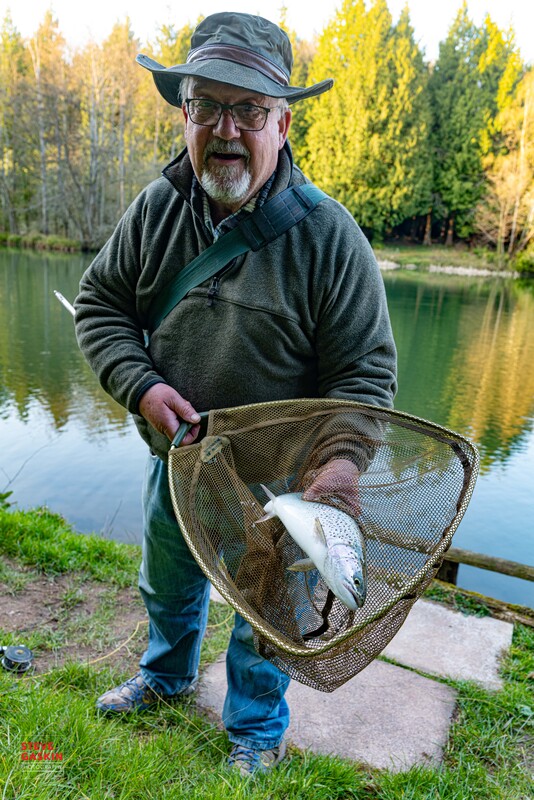 FISHERMAN RON
This was my first visit to Clanna Pond it was early evening and the sun was slowly going down, a good time for some photo's.  This gentleman was the only one fishing and and a very pleasant chap he was to.  Just as we were striking up a conversation, hey presto a Rainbow Trout took the fly and a few minutes later it was expertly landed.   Ron hails from Leamington Spa and worked in the aviation industry before settling in Wollaston,  a village close by.  You will also find him selling his antiques and collectables at the Folly Farm Boot Sale in Coleford most Sundays during the summer months. 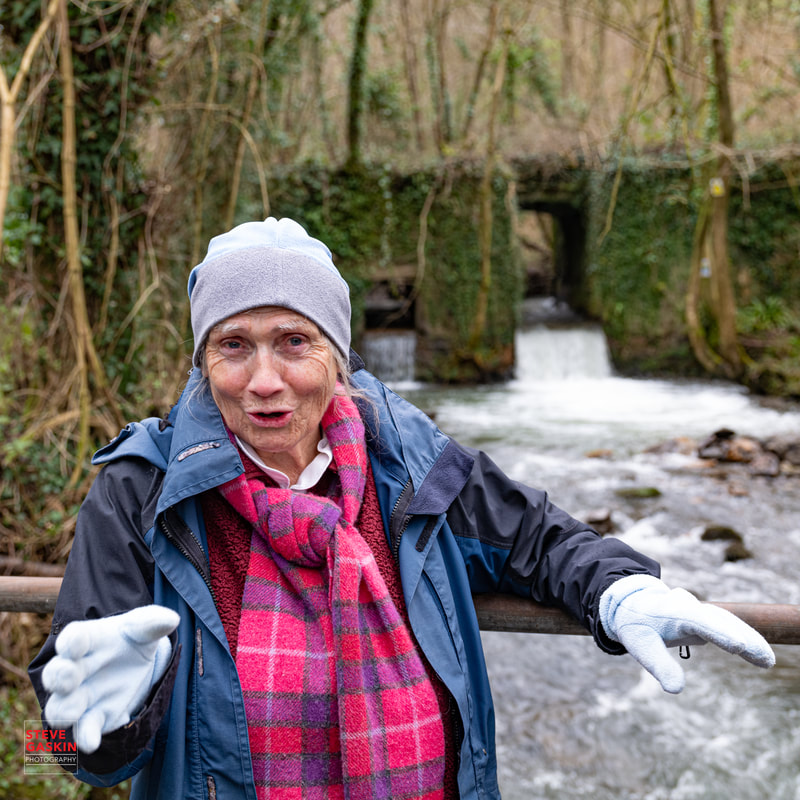 BERNIE ON THE BRIDGE
On my exercise walk today I visited a location I'd not been to before and experienced two wonderful surprises.  The first was an old bridge and with a cascading torrent and then along came the lovely Bernie, who stopped for a chat.   Bernie, originally from Carricfergus in County Antrim has lived in the Forest area for over 25 years and fortunately has not lost the lovely Irish accent.   She is a great outdoors person and walks for miles every day in the forest and never fails to be humbled by its beauty.  We talked about the modern day pressures and how youngsters today don't always appreciate what nature has to offer; "Get them out and off their iPads" was her passionate plea.  We then discovered that her husband had been a member of an athletics club in the Black Country, in the same town I grew up and where my uncle also was a member; as they say, it's a small world.  Bernie doesn't usually like her photo' to be taken, but she kindly agreed and I hope this photo shows what a great character she is. Take care Bernie, and continue enjoying the Forest and your walks. 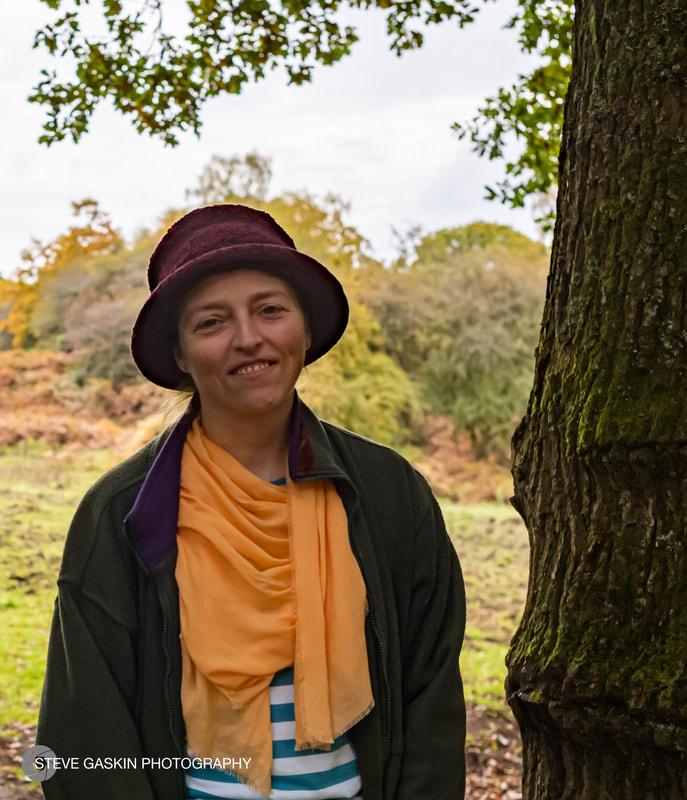 NICHOLA
I met Nichola today at the beautiful Speculation location in the Forest of Dean.   Nichola had just returned to her car after walking her two Jack Russells, Buddy and Rosie.  Like myself  and many people I have met locally, Nichola is not from 'the Forest' but as she say's "from up North"; Crewe actually.  Her personal journey mainly through her job eventually led her to 'the Forest' and again like many others she decided to make it her home.   A lovely personality, it was great to chat with her and capture this smile. 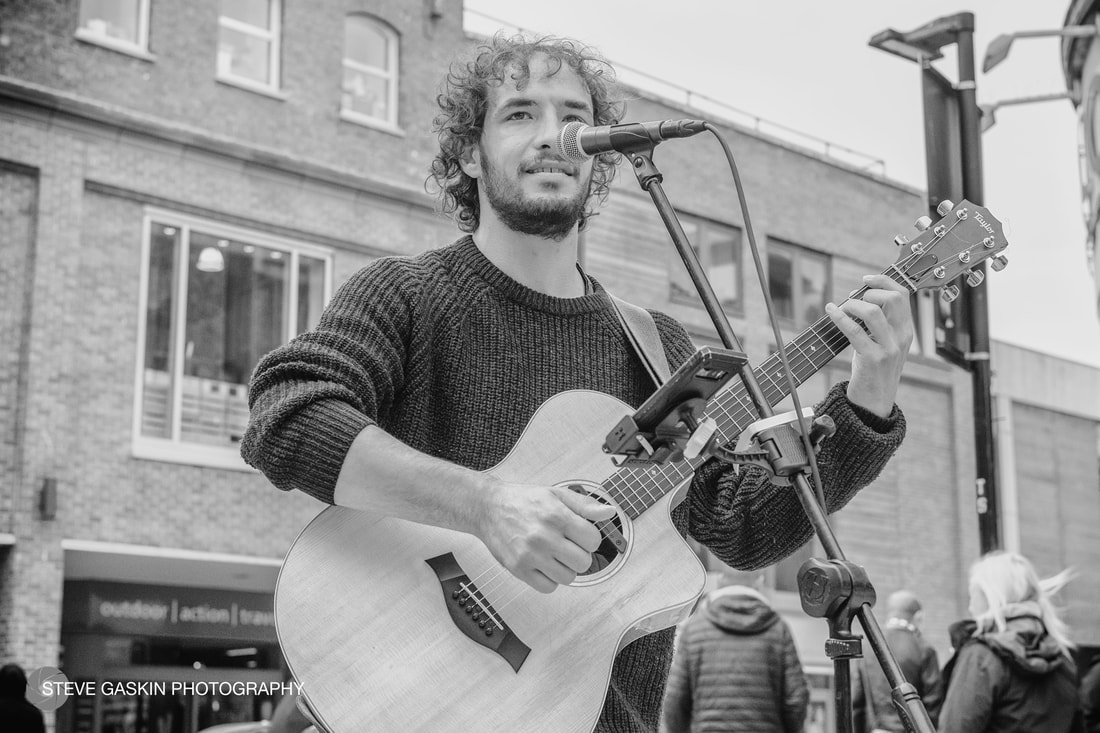 DEXTER AND PATRICK SWAYZE
This is Dexter and his dog Patrick Swayze. Dexter’s been busking in and around Bristol for 10 years; it’s his passion, he doesn't want to work for anyone, just try and make a living doing something he enjoys.  Very good musically with a little  of ‘Cat Stevens’ in his voice.   Good luck Dexter, keep your passion going and thank you for letting me take the photo's. 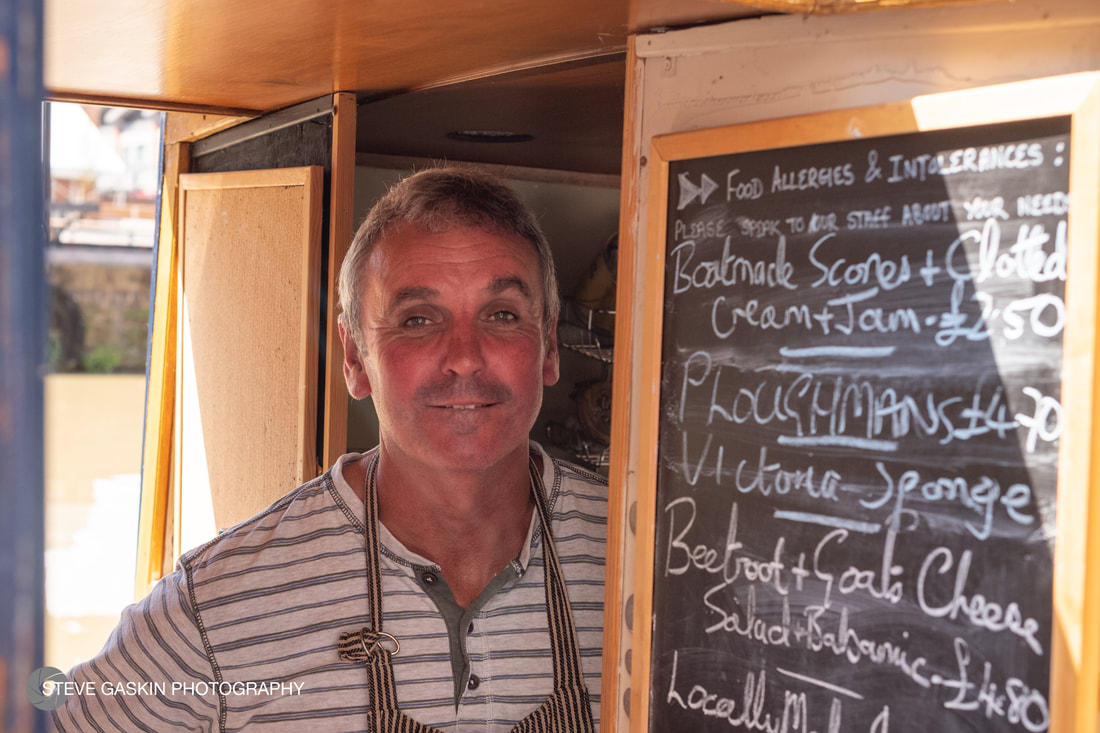 CAFÉ ON THE CUT
​I bought a sandwich from a canal boat café at Gloucester Quays. Nigel used to be a manager at a 200 acre cider farm in Herefordshire but gave it up, bought this cafe boat in February full of hope and excitement for his new venture , then lockdown happened. He reopened a couple of weeks ago and it was nice to be able to give him some custom. A nice sandwich to take away along with a couple of freshly baked Welsh Cakes, yummy.  If you're visiting the Quays and need a snack, give Nigel a try.  I wish him well for the future

IRMA AND LUCAS
This is Irma and Lucas ​Vrij whom I met today whilst walking around Winchcombe.  Irma and Lucas are from Naaldijk in Holland  and are touring the UK.   Arriving at Dover they have already visited Conwy in North Wales and Oxford and were stopping off at Winchcombe on their way to Glastonbury and then on to Penzance.   We had a lovely chat and some funny moments with our accents. On hearing they were off to Glastonbury I asked if they were planning to go to Wells; we've already been there they said, Conwy.  I explained I meant 'wells' as in water well and they laughed.  I then asked if they would visit the Tor, to which they replied, "we may go on some tours", so I explained what the Glastonbury Tor was.  A very engaging couple, on a visit to Cuba some years ago Lucas gave a pair of trainers  and some of their children's clothes to one of the locals who were 'made up' with this lovely gesture.  I hope Irma and Lucas enjoy the rest of their time in the UK. 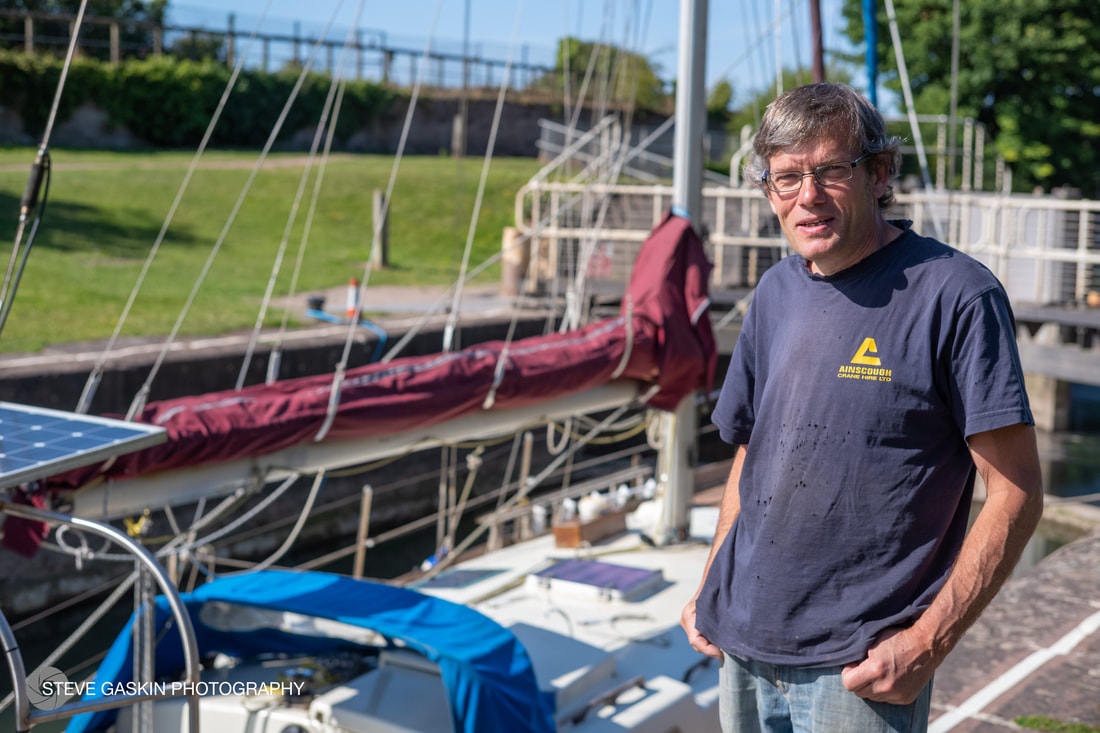 PHIL AND AVON GRACE
Welcome to Phil Davies.  I got chatting to Phil at Lydney Harbour and discovered that the next day Phil and his 'crew', Jim Harris and Rob Fitzpatrick were setting sail on a 10 day trip to Portugal where they will navigate the river Guadiana  to the attractive village of Alcoutim which is 25 miles inland from the sea.  The furthest journey Phil had previously made in Avon Grace was to Brittany, so this is an exciting venture for him.  They travel to Portishead by Friday then take around a day and a half to the Scilly Isles before heading past the Bay Of Biscay to the Atlantic and onto Portugal.  A large casserole, plenty of tins and fresh fruit and vegetables will keep them all fed during the 10 day journey.  I wish them Bon Voyage and hope to get a picture of their arrival to post here later. 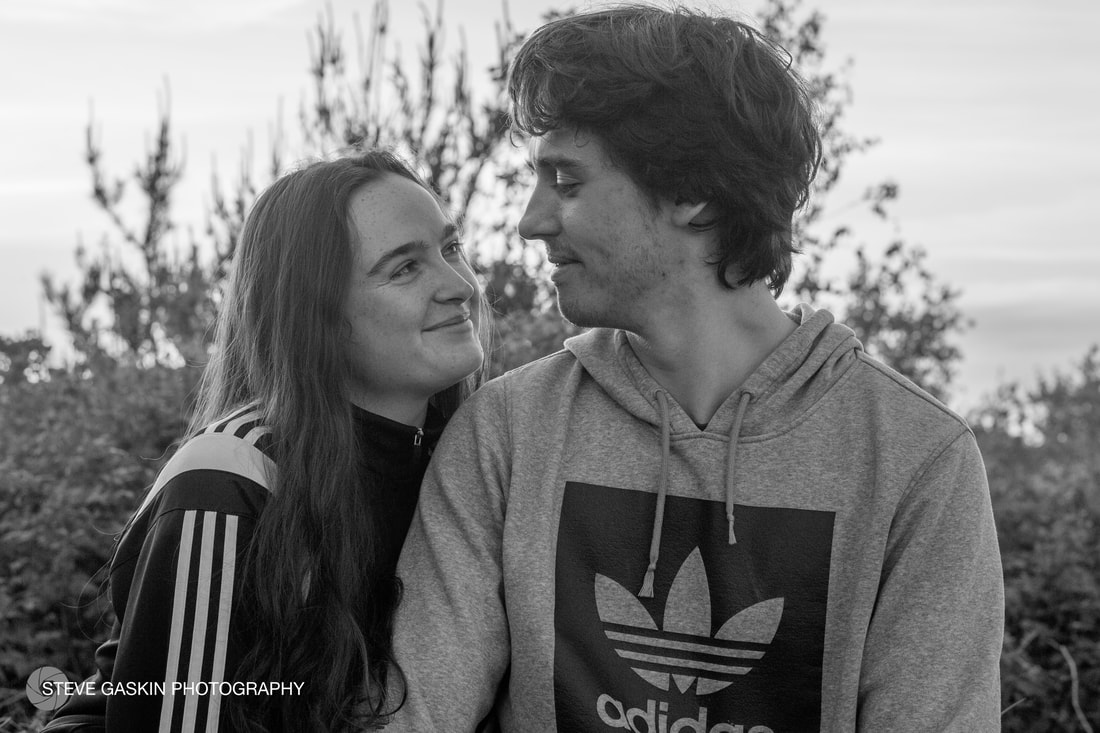 FREYA AND CALLUM
​I met this delightful young couple when visiting New Fancy View in the Forest of Dean, a wonderful view point with a 360 degree vista over the forest; I was hoping to photograph a sunset.  Unfortunately, the conditions weren't quite right so I returned  several days later and bumped into them again.   Callum is presently furloughed due to Covid-19 and clearly frustrated that he can't get back to work. Freya is studying and is also frustrated that she won't be able to submit the final work she would have done for her exams.
Both local people, they are clearly in love and enjoying the wonderful evening sunset that made this visit for me extremely worthwhile.   Good luck Freya and Callum; I'm sure all will work out soon. 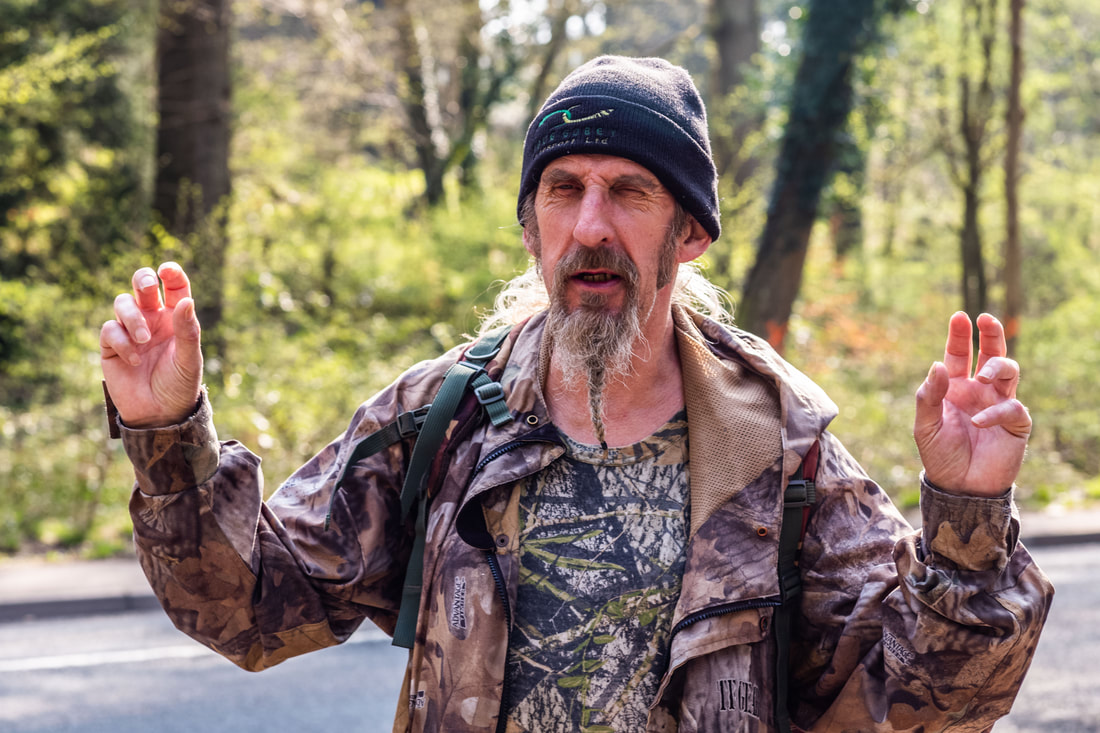 LENNY
I'd often seen this guy out walking the lanes when I was driving by; he'd signal with his hand and I was never sure whether it was an acknowledgement or some other sort of gesture!  Originally from Ross, Lenny is one of the Forest of Dean's true characters and today whilst about to start my short woodland walk, he appeared as if from nowhere, and seeing my cameras asked 'if I'd got anything?".   We began a conversation and I learned that Lenny is a Pagan and believes that "things in life happen, you don't make them happen!"  He is an artist, and crafts walking sticks from the branches he might find and also the antlers from deer that have passed.  What a great character and I just had to take his picture; something apparently he rarely gives. 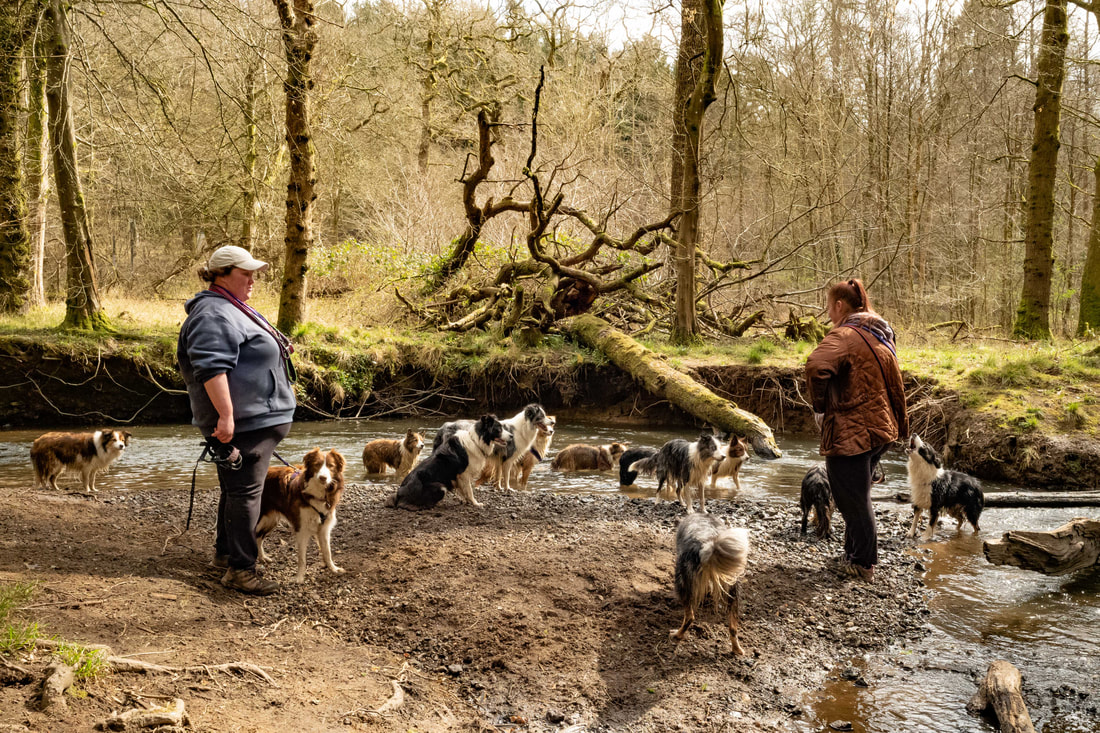 ANNEMARIE, FAYE AND FOURTEEN BORDER COLLIES
My current daily walk takes me along the River Lydd as it meanders through the forest, creating beautiful views and sounds.   I could hear what I thought was a very loud dog until as I got closer I realised there was more than one; fourteen in fact.  Here are Annemarie and Faye who are agility trainers with their fourteen border collies aged between four months and  thirteen years.  Given the current sad situation it was nice to see the enjoyment that the owners were having as their lovely dogs frolicked in the water. 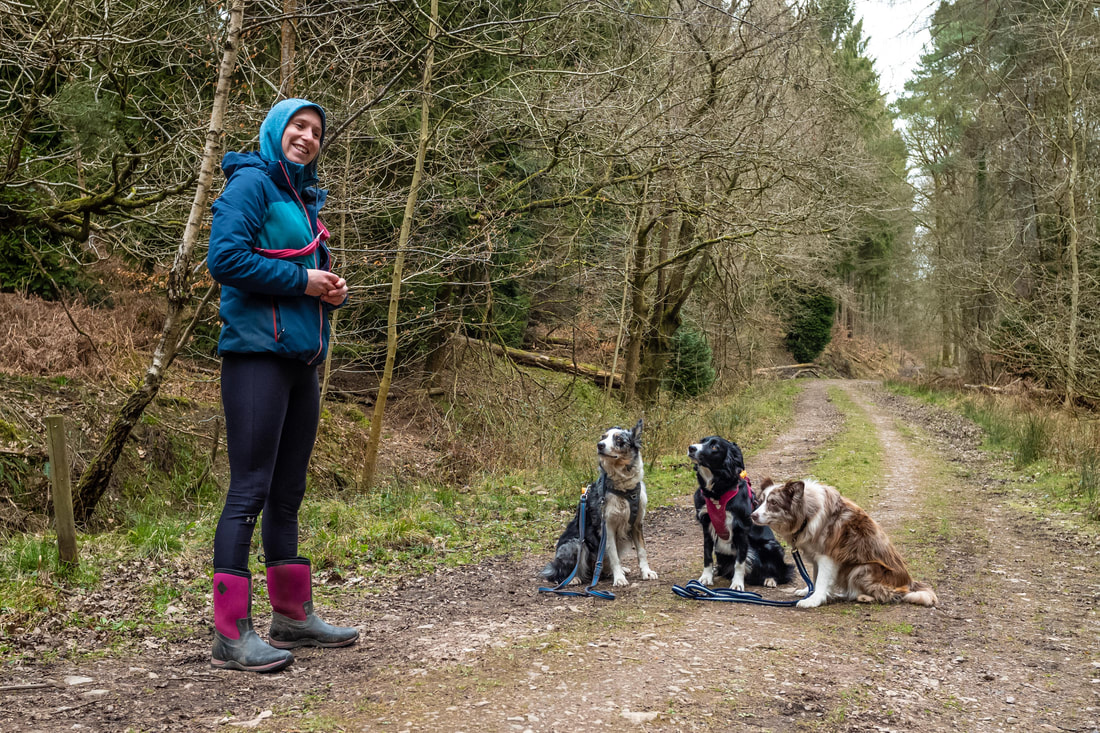 CONNIE - FLEUR, FLY AND SURGE
On a recent daily walk through the wonderful Forest of Dean close to home I came across the lovely Connie who is a dog trainer and her beautiful three Border Collies, Fly, Fleur and Surge.   Connie's cheerful smile and the obedience shown by these three dogs really cheered up my day. 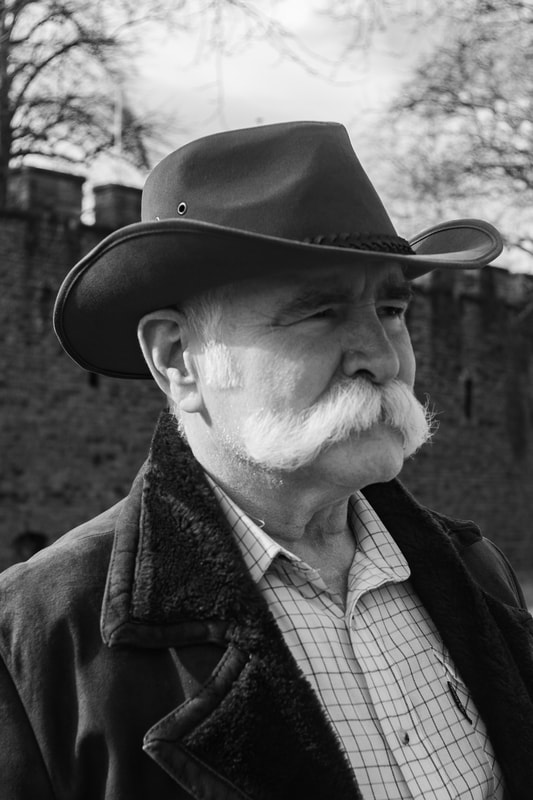 BRIAN
I walked past Brian when in Cardiff and thought to myself, I must ask him if I can take his picture, but you're always a little concerned how people might react.
I asked him the question, he looked at me for a few moments then said, "as long as you give me a minute to groom my moustache!". He then retrieved a very small comb from his wallet and proceeded to 'tidy up' his pride and joy.
Brian was in the Welsh Guards and as you can imagine is very proud of that fact. He told me that when attending a special military event recently he was told that his picture would appear in the press; it did, but apparently it was from below his eyes to his chin. Well Brian, this one's for you. 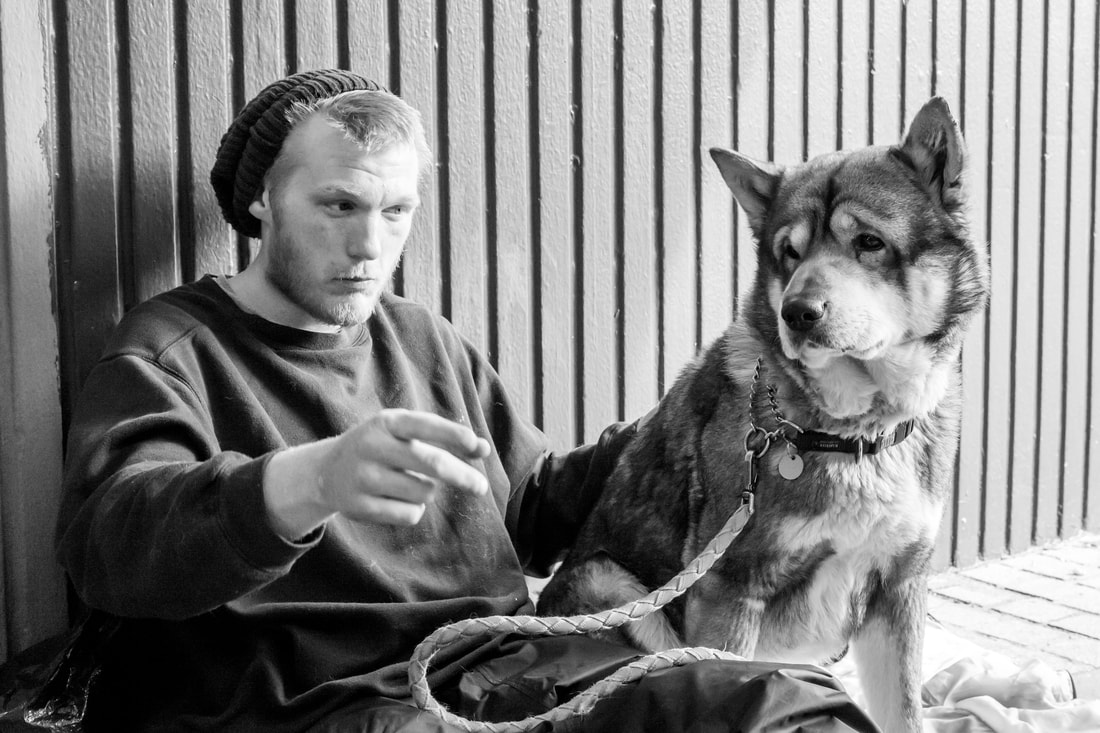 JIM'S STORY
I met Jim on the streets of Cardiff; I asked if I could take some photographs and contributed to his small fund and we had a chat. He's originally from the West Midlands and around eight years ago had made a comfortable life for himself working hard on the boats in Newquay (Wales), earning a decent wage and renting his own flat. Then an accident at work which crushed his hands meant he couldn't work and he became depressed, life became difficult, his finances dwindled away until he lost his flat. He went back home as his mother was ill, but not long afterwards she sadly passed away. Jim jumped on a train not really knowing where he was going and this is how he came to be in Cardiff, and now homeless; his only companion his trusted four-legged friend.  As I said, this is Jim's story.
Back to Features